BlackBerry Q5 on sale in the UK in July

BlackBerry Q5 on sale in the UK in July

Third handset to run off the BlackBerry 10 operating system 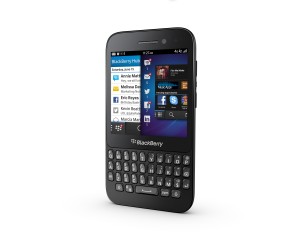 BlackBerry has launched the Q5 smartphone, aimed at the low-end market. It was unveiled by the manufacturer’s president and CEO Thorsten Heins at its BlackBerry Live event in Orlando this morning.

The Q5 will be the third smartphone to run the BlackBerry 10 operating system, following the Z10 and Q10, which have so far been released this year.

Similar in appearance to the Q10, it has a 3.1-inch touchscreen and full QWERTY keyboard. It will also feature BlackBerry Time Shift, which lets users take a range of photos and choose the best one, and BlackBerry Story Maker to enable users to create a story and join together multimedia into a film.

It also includes BlackBerry Messenger, which since the launch of the new platform, lets users have video conversations and share screens.

Mobile Out of Bundle Rates/FAQs

"Ever had problems with your business internet? Happy with the service you got? No, nor was John.......watch his s… https://t.co/J0OYAUAj6H"
"Starting a new business? Thought how your clients will contact you? Watch Jane's story.....https://t.co/OCmnZXXWev"
"Start putting this year behind you and planning for next @johyder can arrange some amazing holidays. Can’t recommen… https://t.co/Fz0jSCV57K"
Follow us @bellcom